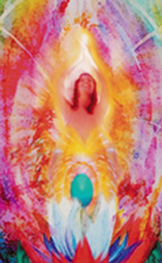 Most people wonder whether it is possible to communicate beyond this Earth plane. The answer is yes; it is definitely possible! There are many human beings on Earth that are able to receive messages and communicate with those who have passed on to spirit world. These people are referred to as mediums; they receive and deliver information from those in another dimension. It is like tuning into another channel, far beyond AM or FM it’s the universal channel!

How does one prove this is so? For myself, I had a profound experience about 25 years ago that totally convinced me without a shadow of a doubt that we can communicate with spirit world. A very dear friend of mine was killed in a car accident. After it happened, he communicated with me regularly for at least two years or longer. When he spoke to me, he felt so close and it was so clear, I would have sworn he was in the room. He often walked with me, slightly behind me on my right. Sometimes he would try to have me come with him at night when I was lying in bed. He would say you have to see where I am, it’s wonderful! It didn’t actually scare me, I thought it was extraordinary! I have always had psychic experiences, inklings and a sharp intuition. But none of them were as profound as this one! It made me truly know in my hearts of hearts there is life after death. It also made me realize the gift I have been given.

In my own experience as a psychic medium, I receive messages in a variety of ways. Telepathic communication is one, which is like hearing messages but without a voice. I have received very clear messages to pass on that mean nothing to me but they have astounded my clients, by using specific words or names. Sometimes as a medium I see (in my mind) distinct scenes with specific items, which I describe to my client. I have visions of the spirit communicating and when I describe them, the client knows for certain it is a specific person they knew here on Earth. As a psychic channeler, I also communicate by writing. These channelings are like a dictation where specific information is brought forth about a spirit, or directly from them. I have done many where the description of their personality and their likes and dislikes while being on Earth comes through, as well as messages and descriptions of where they are now.

I truly believe everyone has the capability of mediumship to be a medium communicating with other dimensions. What gets in the way is either the fear of it or not believing it can happen. Our mind plays great tricks on us, having us fear what is not tangible or proven in a distinct way. I bet most people have had an experience (keeping it to themselves) of a communication, vision or sensing from beyond this world. Considering the fact we are a spirit with a body, when our body shuts down the spirit simply moves along to another dimension, which is much less cumbersome, enabling us to experience greater freedom.

I have found during a psychic medium session there are times when a client wishes to check in on someone in spirit world, to see how they are, where they are or to receive a message and nothing comes through. It is my sensing that sometimes they may not wish to communicate or they are busy, so to speak, or even out of range. I correlate this to cell phones. You know of times when your cell phone may not work in certain areas. This too is so in spirit world!

Here are some examples of communications I have experienced as a psychic medium. They not only come to me in an appointment with a client; they often simply fly into my awareness when doing mundane things such as making dinner, washing the dishes or cleaning. I believe it happens when I am physically occupied with something, as it allows my attention to be focused elsewhere. I have endless stories, but will only give you a few, as I could go on forever!

A few months after my friend’s father passed away, I was driving past their family home. As I drove by I heard him say to me tell them it’s the easiest thing I’ve ever done. Another friend’s son drowned in a lake during the summer. A couple of weeks after, I was making coffee one morning and I heard him say to me tell my mother I’m ok, I’m floating and flying. He said it with elation. When I relayed the message, she told me he used to tell her that’s what he was doing in his room when meditating. This boy was just 12 years old. He also told me to tell Stinky he is ok. Not knowing who Stinky was, I relayed the message. She was a friend of his mother’s who he considered to be his second mother!

A woman in her late 20’s came to me for a medium reading. During it, she asked if I could tune into her friend who had passed away during the previous week. When I tuned in, I sensed this beautiful woman. I explained to the woman what I was seeing. Then I heard her say, tell them I approve of the white, she was smiling. I relayed the message. The woman gasped and said Oh my God. It alarmed me! Then she told me that before the woman went into a coma, she told her husband that she wanted a black casket and tomb stone. When she passed on, her husband went to make the funeral arrangements. He couldn’t bring himself to order a black casket. He felt she deserved white, as she was angelic. So going against her wishes, he ordered everything in white. The woman told me that all of her flowers, etc. were white, including a white dove. The dear soul was letting her husband know she approved of his choices! I must say, that truly astounded me too!

Another women, 88 years old came to me for a medium reading. She asked me to tune into a number of her friends. I instantly had this vision of a number of elderly women standing together. They were all laughing and chuckling and they were joking about the fact she was still here and they were there! I hesitated to say anything at first, feeling that it may be upsetting to her. However, as I have learned through experience, I delivered what I was seeing and hearing. She started to laugh and said that’s them! They are a cheeky group of women I was very close to, and we were always giving one another the gears! We used to joke about who would be left behind here!

She also asked me to tune into her last husband. When I did so, I sensed him but not close by and the words that came to me were he’s out of range, on a special mission so cannot communicate. She said it relieved her, as she had always sensed him around and then suddenly didn’t.

This one is slightly different, as the messages began before the young man passed on. A friend’s 20 year old son was in a car accident with three others. All of them instantly died but him. He looked perfect, not even a scratch on him; however, he had a broken brain stem. He was in a coma. During the week his family prayed for him to awaken. The hospital continually did tests on him. One afternoon while being at the hospital with the family, I felt compelled to go outside for a few minutes. Standing out on the parking lot, I heard him say tell my mother I just can’t do it I won’t be me. At first I thought, how can I tell his mother that when they are praying for him to wake up? When I went back in, the doctors called the family together to tell them his chance of recovery was very slim and if he did come through he wouldn’t be able to do anything for himself. He was a very free spirited young man. After hearing that, I knew I was meant to deliver the message.

Even though she was devastated, she said I know he would hate it. The next afternoon while I was vacuuming, I suddenly had a vision of his mother with her hands reaching out, palms up. There were streams of golden light like ribbons flowing from above and around her. I saw her son, Matt standing in front of her saying mom I gotta go now. There was a sense of excitement, as if he couldn’t wait to get to where he was going. He ran down this glowing white road with a golden light at the end. I turned off the vacuum and told my husband what I saw. Ten minutes later his sister called to say he had died at the time I had the vision.

Words often cannot effectively describe what happens or what goes on in another dimension. It is a sense, a feeling or a heart felt connection that gives it validity. I feel everyone would have a better perception of death and dying if they pursued tuning into spirit world. It brings comfort and a sense of relief.

I am thrilled to have the ability to act as a medium to communicate with those in other dimensions. Especially knowing it can bring peace of mind & clarity to someone or assist them to see there is much more to us than we physically see! Even though many of the events that I tune into are sad and very difficult situations, it warms my heart to know that perhaps the information I am able to bring through gives them some peace of mind and relief.

I feel that as time goes on, there are vibrational shifts taking place where more and more people are opening and trusting themselves to expand in consciousness, far beyond where they are now. It is exciting! It is a never ending expansion; therefore, we can all look forward to wondrous, magical experiences we never ever imagined could happen!

All we need to do is align with the highest order (that of love) and with the highest of intentions, pay attention to incoming information by keeping our antennas on alert. We will be awestruck with the endless potential we have as light beings in human form!

Through me spiritual counseling session with Sage, she truly made me see how much I was trying to control my life, to please everyone else but me! She made me see that there is no place for guilt, and that it is ok to be me, without needing outside confirmation. I can’t believe how strong I feel now! And the things other people had said to me no longer bother me; in fact they gave me the fuel to continue to be speak my truth even more! — Lynne (Canada)

Sage has been providing support for the past 25 years to people in a variety of ways, such as spiritual counseling, psychic readings and channelings. She has been interviewed on TV & radio. Sage lectures at various Health Expos and other events Sage is available for online chat and phone psychic readings, spiritual counseling. You can also visit Sage in person in Victoria, B.C., Canada.