On the 31st March, 1848, The Fox Sisters, two young girls, made a break through with contacting the entity who had been disturbing the family with strange sounds and activities. They heard spirit rapping’s inside the walls of their home. They began communicating with the dead. The Hydesville Knockings in the United States of America lead to the investigation of the Mediumship of the Fox sisters and the birth of modern Spiritualism. These two psychic readers became well known all over America. When his son had died in 1852, President Pearce invited the Fox Sisters-psychic readers, to the White House to hold a private sÃ©ance. SÃ©ances were held in the White House on a regular basis. 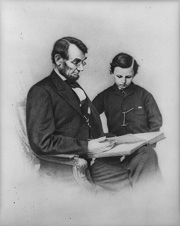 President Lincoln’s son William died at the age of 11. His wife Mary Todd hired a medium Nedy Colburn , who led several sÃ©ances in the white house. One day President Lincoln was looking in the mirror and he say two faces looking back at him, one face was clear and the other was shattered. Mary Todd said this meant his first term would go well but in his second term something bad would happen. President Lincoln also had a dream. In his dream he heard weeping going on so he follows the sounds into a room where he sees several men around a coffin. He asks a solider by the coffin who it is that has died. The soldier answers it is the president who was kill by an assassin. Soon after, Lincoln’s dream became a reality, when on April 14th, 1865 John Wilkes Booth murdered the president at the Ford Theatre.

General Grant’s wife also had a premonition that something bad was going to happen to her husband at the theatre that night. She warned her husband not to go with the Lincoln’s and he decided not to go. It was later discovered that General Grant’s name was also on the list of names John Wilkes booth was planning to assassinate. After President Lincoln’s death there were many reports of his spirit moving around the White House.

James Martin Peebles (1822 – 1922) known as ‘the spiritual pilgrim’ as he enthusiastically spread his philosophy through his writings and travels around the United States and the world. Himself a medium/psychic reader was surrounded by what he called his “band of angels” from whom he received inspiration and spiritual guidance.

Mark Twain had a vivid dream in 1858 in which he saw his brother’s death. He saw his brother in a metal casket with flowers on his chest; the casket was sitting atop two chairs. His brother had worked on the steamship Pennsylvania. Two days after the dream the Pennsylvania exploded and his brother died, 150 people were killed. All the others who had died had pine coffins but his brother had a metal casket purchased by two unknown women. When Mark Twain went to see his brother and walked into the room where the casket was laying, it was sitting atop two chairs. As he was standing there a woman came in and place the same flowers in the casket Mark had seen in the dream, white flowers with a single red rose. Everything in his dream had come true.

Twain also publicly announced to the world the coming of his own death. He said, “I came into the world with Haley’s comet in 1835, and now it is coming again next year and I will go out with it.” April 20th 1910, he died the next day.

In the 1850’s, the greatest known psychic medium in the world is Daniel Douglas Hume from Connecticut. As a psychic reader he did sÃ©ances for the rich and famous.

Edgar Cayce, a psychic reader has become one of the most helpful psychics the world has ever known. He did his first psychic reading over 100 years ago in 1901, in his 43 years he did over 14,000 documented psychic readings which are on file today at the Association for Research and Enlightenment Inc.

In June 1931 the Association for Research and Enlightenment, Inc, was formed as research body, they were interested in such things as holistic health care, they studied psychic mediums, psychic readers, spiritual healing, meditation, dreams, and the study of life and death.

Edgar Cayce gave insight into Judaism that were verified a decade after his death with the discovery of the Dead Sea Scrolls. In world affairs he saw the collapse of communism nearly fifty years before it happened.

Since 1959 the US navy has conducted psychic experiments.

Jan 31 1971 14th Apollo Mission Edgar Mitchell was doing an experiment aboard the space shuttle he was testing mental telepathy with friends back home. It turned out to be not so successful but with his curiosity in this field he then started an institute of Noetic Science, in Sausalito California, to study psychic phenomenon.

Central Intelligence Agency used millions of dollars to do research on psychic development to use in defense and against the Soviet Union, using psychic readers as remote viewers.

There are psychic detectives all over the United States. One world-renowned psychic reader is Peter Hurkos, from LA. He is employed by the police department to solve unsolved crimes. To date he has worked on over 800 criminal cases.

Irene Hughes, psychic reader in Chicago has received commendations from the police for helping solve over 15 murder cases.

Ronald Regan March 30 1981 Nancy Regan was concerned about her husbands safety and for seven years used an astrologer to plan her days.

In 1995 psychic works became de-classified and open to the public. Currently there is Sylvia Browne, a famous psychic reader who has published many books and appeared on many TV programs, and of course we have the well known psychic readers like John Edward and James Van Praugh who are both best-selling book authors, along with their own popular TV shows. The latest successful TV show “Medium” portrays Patrica Arquette as Allison Dubois a well know psychic medium, who is known to have a file of over 2000 cases for the police department. She has a wait list of 3 years for personal readings for clients. There are many more people than ever before open to the possibility that we can in fact communicate from the beyond.