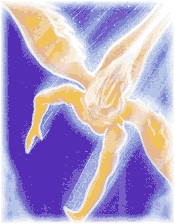 I have been asked many times what channeling is. Let me explain how I perceive it … I have always had the gift of knowing certain things, being able to receive a vision (clairvoyance) or hear a message (clairaudience) or sense something, which is (clairsentience).

In the early 90s I was given a distinct message to write. The information came to me like a dictation; as if someone was speaking to me telepathically. I was told to take people’s names at birth and their birth date; this would link me to them. I came to understand that I am a channel or conduit to pass on the information I receive. I consider myself to be a messenger, passing on knowledge, messages and other information to people to support them and give them guidance.

I have often been asked how do I know the information I receive is correct. Or how do I know it is from a good place. My answer to the first question is that I have learned that the information I receive for someone is for them; therefore, it is not for me to judge. The answer to the second question is; I always ask for the highest and best information for all concerned, therefore, I will not receive anything that is not. The intention is always to be in integrity, in the highest order, that of love.

I often get psychic impressions and visions as I write the channeling; however, even though I am not in a trance, I am not fully aware of what I am writing. What I do know is that the information flows through easily, and I sense the vibrations. People always ask me who it is I channel. Is it a particular spirit guide, a group or my own spirit guides? The answer to this is; at first I was given a name of a council and then it changed to another group. Both were very strong yet gentle vibrations, full of love and support. Eventually they left and at first I was disturbed; however, since then I feel I am linked strongly to the source, the energy & spirit of “All That Is”, that of God, if you will.

I feel the connection is on a soul level with the person I am doing the channeling for. The feed back I have received from my channeled writings is most interesting. Some say it gave them shivers, for some they cry as they have never had anything touch them so deeply, others have said it described details regarding themselves that they have never revealed. Or some say you read me like a book, or it fits like a glove!

Channelings I do about people that have passed on to spirit world, acting as a medium, seem to be very supportive to those that remain here on Earth. I have received distinct messages from those in spirit world that totally prove it was the person communicating. I have taken their name at birth, their birth date, and their passing date. Many have told me the wording and descriptions of things are exactly how they were!

I did a channeling for a woman whose friend had died the week before. From spirit world she told me to tell them she approved of the white. It meant nothing to me, however, her friend was blown away! Apparently she knew she was dying and asked her husband to have a black casket and head stone. After she died and he had to make the arrangements, he couldn’t bring himself to order black. He felt she should have white. So, going against her wishes, he ordered everything in white. Her funeral was all white; flowers, decorating, everything. The woman wanted me to pass on that she approved! I told them I could sense her smiling.

A friend of mine recently lost her twelve year old son. I hadn’t seen much of her in the past couple of years, therefore, did not know much about him. After finding out about his accident, he communicated with me. He told me to tell his mother he is ok, he is floating and flying! I told her this; she looked at me in shock. She said he used to go into his room to be alone and meditate (he had learned TM meditation) and he would come out and say he was ok now, he’d been floating and flying! He also told me to tell Stinky he is ok too. Stinky is a woman that took care of him, like a second mother. That was his nickname for her!

Channelings can support and assist people in making decisions related to more everyday living too. I have done many for people in relationships that need help in understanding certain aspects. Many people want to be able to see who they truly are and are too modest to admit it. The channeling spells it right out!

Often the channelings I do for people activate a memory of what they are here for and connects them to their clans, so to speak; like minds with common intent. The wording stirs them on a core level, awakening who they truly are. By doing so it assists the person to pursue their commitment and contribution for being here; which fulfills them from their heart. All written channelings bring further clarity when one reads it over a number of times. I have done channelings for myself, and found them a year later. When I read them I am amazed how I perceive it now, and how much the guidance and support confirmed things for me.

Truthfully, channelings are communicating from essence to essence, rather than with the senses of the physical body. Communicating essence to essence to the source of “All That Is”, is in the invisible realms. It is intuition in action, which is the voice of the spirit within! This opens one to further expansion in consciousness, bringing clarity, truth and magical adventures! Often people wish to discuss their channeling with me to receive my insights and to ask questions. I offer follow-up consultations for those that wish to do so.

I do write channelings that bring information through that supports all of us. I publish these in various magazines and have read them at different expos and events.

Sage has been providing support for the past 25 years to people in a variety of ways, such as spiritual counseling, psychic readings and channelings. She has been interviewed on TV & radio. Sage lectures at various Health Expos and other events. Her channelings and articles are featured in various magazines. She has local and international clients. Sage has a reputation for being believable. Sage is available for online chat and phone psychic readings, spiritual counseling, or you can book a channeled writing with Accurate Online Psychics. You can also visit Sage in person in Victoria, B.C., Canada.